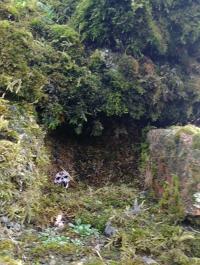 This tag is hidden at the remains of the lead workings at Glengonnar Mine, a confirmed haunted location!

Visitors to this area often report talking to an elderly gent who was wearing dated clothing; a collarless shirt, worn cloth trousers and muddy work boots. Sometimes he wears a flat cap too. The elderly gent is normally sat on the ruins and says how things have changed over the years. If you have a dog with you (he normally appears to dog walkers) he will say how he likes dogs and will talk to your dog. However your dog will not react to him as it would react to a normal person. Everyone has reported that their dog will look at the man but then ignore him or even back away. Other dog walkers have reported their dogs acting strangely in the area; barking at things that are not there, growling and becoming very defensive of their owners or even appearing to play with someone that cannot be seen.

This tag is hidden in one of the ruined buildings.

Hint: 6 feet high in the corner. 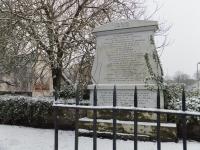 Built by Archibald the Grim, (a name given due to his ghastly grimace during battle), the crypt witnessed the beheading of Sir Scotty Duck of Leadhills. It was also linked to the infamous Black Dinner when Tristan, sixth Earl of Thom and his partner in crime Blood Hand Andre, set out from Dumfries for Edinburgh Castle where they were brutally executed.

One disturbing feature of the crypt is its historic Gallows Knob; the Duck's once boasted it was never without a tassel! Some visitors to the castle report unexplained breathing noises, feeling ill at ease and voices with no apparent cause…

To find the tag .....from the outside, left hand side, ivy covered window. 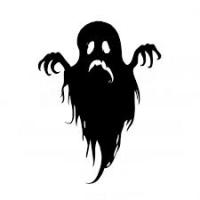 There have also been stories of spirits lurking within the graveyard walls and the surrounding area. While these stories may at first seem just as ludicrous as the pickled head of Scotty C Duck, it is important to note that many visitors to the chapel who were unaware of its reputation as a supernatural hotspot have reported odd occurrences and apparitions which vanish as suddenly as they appear........ you have been warned !

To find the tag, go down to the bottom corner and look for a flat stone ... tag is underneath.