Renowned the world over as a paranormal hotspot, the A75, which runs from Gretna in the east to Stranraer in the west, is believed to be the most haunted road in Scotland.

There are two key areas on Scotland’s Ghost Road where haunting activity is at its most frequent.

One stretch is located on the old A75 which runs from Annan to Gretna via Eastriggs; the other is a wide, straight section of road known as the Kinmount Straight.

Eyeless spectres have been reported along with a grinning creature in the trees, a bodiless pair of legs and multitude of phantom hitchhikers. Perhaps the road’s most famous incident occurred in the early 1960s when the Ferguson brothers witnessed all manner of weird apparitions; from a hen flying at their windscreen to ‘great cats, wild dogs, goats, more hens and other fowl, and stranger creatures’.

In more recent times, an elderly man in tweeds has been seen standing by the old Kinmount bus shelter.

Inside right hand side window. 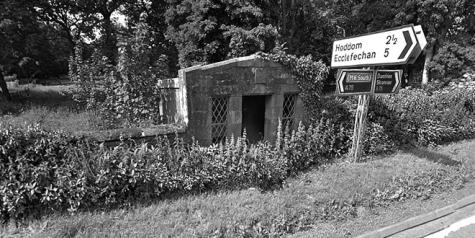