(This tag is hidden a bit harder then the rest. Read the Hide Hint at the end.)

In the summer of 1984, while preparing Highland Park for some landscaping, a bulldozer uncovered six skeletons. Later, six more skeletons were discovered after a rain storm. After an examination and investigation, around 300 additional skeletons where found buried in Highland Park. Over 500 bodies are still thought to be buried in the area.

No formal record of the burials have ever been found.

1600 South Ave has some blurred past. Starting in 1826, the site was known as the Monroe County Poor House (Alms House). In 1827 a Work House was built and later called the Penitentiary. In 1857, the first buildings of the Monroe County Insane Asylum were opened. In 1863 the Asylum was consider a separate institution from the Poor House. In 1872 a new Alms House was built to replace the Poor House. In 1891, New York State bought the Insane Asylum, bringing it into the state care system and was renamed Rochester State Hospital. In the 1960's the Rochester State Hospital was torn down to make way for the Al Sigl Center.

Conditions at the complex where less than humane. Excerpts from various public records:

"There are two basements, occupied for cells for the insane, and for sitting and sleeping rooms. The buildings have no ventilation and are heated principally by stoves"

"They are under one keeper who employs but a single assistant, who in turn is also assisted by the able paupers."

"On an average, seven or eight paupers are placed in one room, though sometimes as many as one hundred are placed in a single apartment."

"The average number of inmates is three hundred and sixty,"

"There is here both a fever and a pest house apart from the main buildings. Among the paupers are five blind and two deaf and dumb persons. There are furnished no facilities for bathing, an omission of a very important sanitary measure. During last spring the measles were prevalent in the house. "

"Of the inmates twenty-eight are lunatics; thirteen males and fifteen females; all are paupers. Forty-two lunatics have been admitted during the year, and about that number are received each year. Ten women and eight men are confined in cells. During the past year six have been materially improved. As a means of restraint handcuffs are sometimes used."

As late as 1873, the area behind the buildings was being used to bury those that died at the complex. This area was known as the "Bone Yard" but was given no formal cemetery name. On January 8, 1873, the County Board of Supervisors made a decision to discontinue burying people in the informal cemetery.

The size of the cemetery is thought to have been about 175 feet by 125 ft. And while 305 bodies were exhumed, it is speculated that there were around 1000 people buried in this plot, many on top of each other, and up to 8 feet deep.

Prior to 1847 and after 1850, no vitals records were kept. Between 1847 and 1850, Ebeneser Bowen kept the records of Marriages, Births and Deaths that occurred at the complex. About 300 deaths were recorded over 4 years. 68 of those deaths were from children under the age of 5. Hundreds of other names are lost to time.

It is believed that many of the these lost soul still wander the area, not knowing how to pass on. Many weird sights have been reported at night. Shadowy figures, glowing orbs and mist have all be reported.

For reference, the parking coordinates are the approximate location of the Poor House, The insane asylum was built to the south. The hide location is the site of the Bone Yard. Yes, you will be standing on top of hundreds of skeletons.

Hide Hint: This lost soul is not buried, but you will have to uncover it. Like the bodies here, it is out of sight. It is within an inch of the Remembrance Stone. What can you feel in the dark? 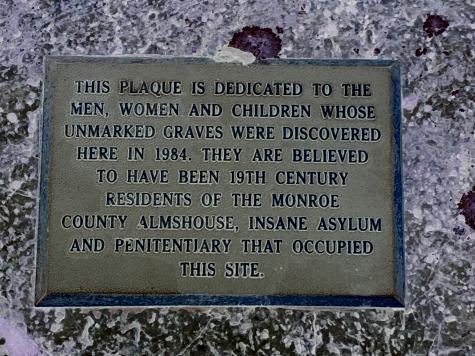 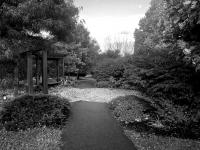 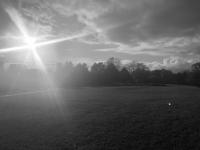 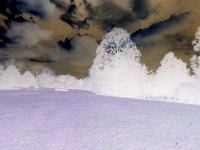