There's a legend that states a monster lives somewhere in this pond. And like most legends, it has a basis in truth but the facts have been lost or jumbled over time. There have been many unexplained disappearances both at and nearby the pond but no-one has, as of yet, figured out who or what, the REAL monster is.

The theories have been all over the place. Radioactive Bog Mutants, Slime People, Vampires, Britany Spears… each theory is crazier than the next. People have claimed that aliens have been kidnapping folks that come to close to the pond, or that it's actually an extra-dimensional gateway that sometimes opens accidentally, sucking the unwary through. When folks pointed out the mangled corpses however, that theory was forgotten quickly. Others have claimed that it's the handiwork of three escaped lunatics that traveled with a circus for a while as clowns, before making their final home somewhere nearby. This pond is supposedly now part of their hunting ground.

But none of those are correct. People have come here for years, testing, taking samples, trying to solve a riddle who's answer has been right in front of them the whole time. As it's right in front of you. Right Now. Shh… listen. Do you hear that? The leaves rustling in the wind? Or is that the sound of the trees as they inch forward; Hungry and wanting to feed? Branches creaking forward and roots snaking out to grasp? Is that the sound of your heart? 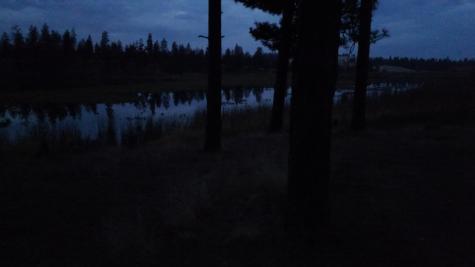