SPOKANE, Wash. — The Fairmount Memorial Park in north Spokane had an edge give way creating a miniature landslide Friday.

The slide carried a vault holding a casket about 12 feet down a hill in what the cemetery's CEO Denny York described as a "freak accident."

Crews spent hours assessing damage overnight, removing and temporarily relocating the vault and blocking off the area. Only one gravesite was affected.

Staff said they are not sure what caused the slide, but said it might have been triggered by a tree damaged during summer storms or a broken water pipe.

"It is sad. But you know, when you got pipes and irrigation and stuff like that. We've had a lot of rain and weird weather … nothing is really surprising me much," said Rosie Deal, an eyewitness to the landslide.

Five other headstones were just a few feet away from the edge as well, but staff determined they were not at risk of sliding.

The family of the affected site have been notified. 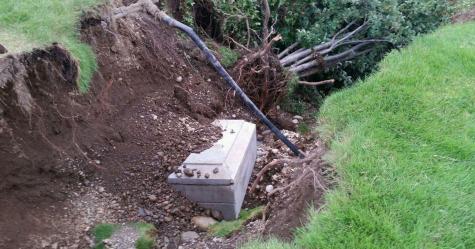